The National Scandal About Rain Heads

Posted at 16:53h in Uncategorized by MetroAdmin 0 Comments
0 Likes

There’s a national scandal unfolding here in Australia that needs fixing urgently.  Huge numbers of homes and commercial buildings across Australia are ready to flood inside.  All because of a single, defective roof plumbing product called a rain head. The problem is basically no rain heads fitted to Australian homes and buildings have remotely adequate overflow provision.  That means if the rain head blocks up, the entire building beneath it can be flooded out.  Australian Standard AS/NZS3500.3 clearly sets out the requirements for an overflow weir, at least the full width of the box gutter servicing the rain head.  A hole or slot drilled into the rain head does not (as many plumbers unfortunately believe) comply with the Standards.  The rain head also must be able to overflow at full capacity in case of a blockage; with these designs its simply impossible.  Many building owners across the country have already been on the bitter end of the problem.

Authorities however haven’t been policing enforcement and compliance, nor sufficiently educating plumbers about rain heads – just look at the photo (left)  which shows a typical ‘nest’ of non-compliant rain heads on a Melbourne apartment building, or all of the non-compliant ones below off residential houses instead.

Check the buildings in your street.  Check the buildings on your way to work.  Check your own house – if you see rain heads like these, they aren’t compliant.   Yet they are out there in the hundreds of thousands if not millions in Melbourne alone. Not a single one above complies with the Australian Standards.   How did this happen in first world, modern Australia, potentially putting millions of buildings, their contents and occupants at risk??

It’s like the flammable cladding disaster, but this defective product doesn’t burn – it just floods buildings instead.

That means that every single day thousands of brand new but defective, non-compliant rain heads are installed across the country.  Many plumbers know the rain heads are wrong but still install them.  Other plumbers just don’t realize and fit them anyway. And every day houses and buildings flood un-necessarily, causing major disruption to business and peoples lives.

Entire factories get drowned out and are prevented from working for weeks or months.  Houses and apartment buildings are swamped with water, un-replaceable possessions destroyed and buildings filled with mould.  There’s massive personal dislocation and loss.  Then the inevitable battles start with the insurance companies.  Many insurers are also starting to deny these claims because of ‘faulty workmanship’. It goes on and on. The losses to the Australian economy, including losses to insurers and to the unfortunate who aren’t insured at all or get their claim denied, must be massive.

Here are some images from “The Age” newspaper showing typical ceiling collapses due to rain head issues: And here’s another (below) taken by Metropolis.  This Melbourne apartment gets overwhelmed by defective rainheads every time it rains.  The damage outside looks bad enough but internally it’s  infested with mould and uninhabitable.  The tenants have left and the owner is now losing thousands of dollars in rental income.   But these problems are happening right across Australia. 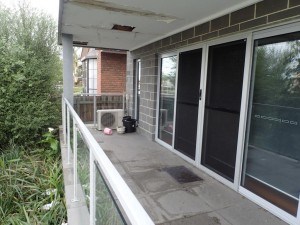 With potentially millions of buildings affected, what do we do now??

Affected building owners should not take no for an answer.  The safety and longevity of your property has been put at major risk by people who were expected to know better.  You as a property owner have been ripped off; you didn’t get the compliant work you paid for and you also weren’t protected by the authorities.  That’s why it’s a scandal.  You absolutely have the right to get it fixed and to safeguard your property.

If your plumber doesn’t understand what the issue with rain heads is, find someone else who does – urgently.

If people in authority and your plumber still won’t act, take your own action.  Have the rain heads replaced yourself.

The only compliant box gutter rain head on the Australian market is the newly released Dam Buster.  Visit www.dambuster.com.au – this is a brand new, Australian invented rain head that actually complies with the standards and in the process also beats the daylights out of all other rain head designs world wide.   Colorbond – no worries.  Different sizes – no worries.  Retrofit to existing installations – really easy.  It’s now so simple that you can even buy them on line.

If you are in Victoria and need to take action to enforce a claim against the installing plumber, Metropolis Solutions can also help you every step of the way – please contact us for more details.

Whatever Happened to Rain Heads???

Did you get wet yesterday?